Blockchain: A Tool of War?

The way humans wage war is ever changing.

And because of that, the weapons we use in war are constantly being redesigned. In fact, much like a virus, they seem to adapt to their host.

All you have to do is take one look at history and you’ll see what I mean.

During World War I, it is estimated that around 38 million people died.

Roll around to World War II, and you’ll see that World War I was just the start. Over the course of World War II, it is estimated that between 60 million and 80 million people died.

The United States ended that war by raining down fire, unleashing the never-before-seen devastation of the atomic bomb.

And that was just another new innovation and a byproduct of war’s constant evolution.

So where does that leave us today?

Society is a lot different than it was during either World War I or World War II. So what will the next atomic bomb look like?

Well, considering that we now live in the digital age, where the great bulk of our interactions take place online, it is likely that the next atomic bomb will come from our computers.

In fact, one good cyberattack, in theory, could take any country off the grid. Imagine no more plumbing, electricity, or easy communication. It would be devastating.

We’ve already seen a few of these damaging cyberattacks, including the “WannaCry” ransomware attack that was unleashed in 2017. This worldwide cyberattack created mayhem for hospitals, companies, and individuals.

And it could be small compared to what we have to deal with in the future.

But what if there were a small technology that could help protect great and small nations against the threat of a cyberattack?

It turns out blockchain could very well be that technology.

Blockchain Could Be Our Best Tool Against Cyber Warfare

Before we take a deeper look at blockchain’s potential use as a tool against cyber warfare, we want to remind our readers of the breaking story that brought this use case to our attention.

The lab will analyze how blockchain technology could be used to defend against cyberattacks.

Alexei Malanov, a member of the new blockchain research team and a cybersecurity expert in Moscow, told Izvestia that a blockchain-based platform can make it more difficult to hide a cyberattack.

Malanov further explained that online attackers often clean up after themselves. When they come into a system, they wipe everything down to make sure there are no prints. And this can prevent systems or those maintaining them from ever knowing there was an intruder.

But how can blockchain help with this?

The truth is that blockchain could serve as a valuable tool against cyberattacks for the same reasons it makes a good backbone for decentralized currencies.

Blockchains are immutable. They are decentralized. They allow for data encryption and a high degree of transparency.

In theory, blockchain technology could make it far harder if not impossible for an intruder to hide their presence in a system.

The Infosecurity Group backs our theory.

It published a report in 2018 stating that blockchain could “potentially help enhance cyber-defense as the platform can prevent fraudulent activities via consensus mechanisms, and detect data tampering depending on its underlying characteristics of operational resilience, data encryption, auditability, transparency, and immutability.”

And because blockchains are distributed, they don’t have a “hackable” entrance or central point of failure. Essentially, with a blockchain, the door has been slammed shut, because blockchains provide more security than various present database-driven transaction structures.

And blockchain has come to us at just the right time.

As Bitcoin, the first flag-bearer for blockchain technology, took its first stumbling steps into the world, the rate of cybercrime was slowly on the rise.

In fact, there has probably never been a more desperate need for a tool like blockchain.

Want to learn more about cryptocurrencies and blockchain tech?

We have you covered! Sign up for the FREE newsletter, The Token Authority, today and gain first access to actionable stock market commentary, regular ICO updates, and weekly crypto breakdowns. Plus, if you sign up right now, we'll immediately send you our free report: "3 Cryptos to Watch Today."

There is no denying that cybercrime is on the rise in the United States. In fact, it’s on the rise around the globe.

And just about everyone is feeling it, from national governments to corporations to individuals.

In 2017, the number of ransomware attacks observed by businesses spiked dramatically. 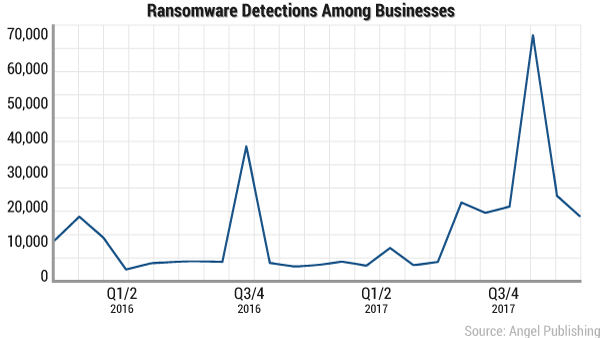 It is now expected that the global cost of cybercrime will reach $2 trillion by 2019, which is a threefold increase from the 2015 estimates of $500 billion.

More than likely, you’ve even heard about a few of these infamous data breaches, specifically Equifax, a collections agency that experienced a data breach that left more than half of America compromised.

And those are just the companies. National governments around the globe are getting slammed with cybercrime, too.

In 2015, the U.S. government suffered an incredibly embarrassing data breach, and it was mainly the result of human error and lack of foresight. In this data breach, a database of 191 million voters was exposed. What was the human error? Well, put simply, the database wasn’t configured properly, and this exposed the information to any criminal who wanted to step in and take it.

The information that was lost included personal information like names, party affiliation, and email addresses.

Blockchain can help with this kind of issue by providing secure platforms to store incredibly sensitive data like the data that was accessed in both the U.S. government breach in 2015 and the Equifax breach.

This is a tool the world needs, especially considering that the next war will more than likely be waged on the web, not the ground.

To learn more about security blockchain companies, make sure to check out our other article on the issue.

And stay tuned for more coverage.

P.S. Recently, Managing Editor Alexandra Perry had the pleasure of talking to Shidan Gouran about his company Global Blockchain Technologies and where the blockchain sector is headed in the future. To listen to that podcast, click here.